Home > Technology & Services > The Kajima Cut and Take Down Method

This is a video of demolition work.

1. Background and Motivation for Development

Buildings are usually demolished by placing heavy equipment and workers on the top floor of a building, and lowering dismantled material to ground level.
Kajima, however, demolished its former head office buildings using a world-first technique called the Kajima Cut and Take Down Method, which enables demolition work to be carried out on the ground floor. By starting at the bottom, gutting one floor, and then lowering the entire building down on jacks, one floor at a time, all the work can be performed safely at ground level.

The Kajima Cut and Take Down Method affords a building being dismantled the same level of seismic and wind resistance throughout demolition.
We install a Core Wall System and Load Transferring Frame into a building's structure to maintain the same level of seismic resistance during the demolition work.
Although our method could be applied to almost any type of building, there are some conditions that may limit the use of this method.

This method has the following advantages compared with conventional methods.

In conventional methods, construction noise tends to emanate over a wide area from the upper floors of a building. The Kajima Cut and Take Down Method reduces both the number of noisy processes, and the distance at which noise can be heard, as the demolition of beams, floors, and outer walls is carried out at ground level, which also lessens dust dispersion.

Reducing the amount of waste at the start is usually the most effective process among the 3Rs of reduce, reuse, and recycle. However, as the amount of waste from a demolition site is a fixed quantity, there is no other choice but to sort and recycle as much as possible to increase the recycling rate. Using the Kajima Cut and Take Down Method, waste materials can be easily and accurately sorted, floor by floor.
Being able to wait until a predetermined amount of sorted waste material can be dispatched from the demolition site also makes it easier for recycling facilities to plan ahead and be efficient. Using this method, Kajima is able to sort waste into 30 types of material for recycling, while the conventional method can only sort waste into around 20 types of waste. With a recycling rate of over 90 percent for the interior portion of a building, the Kajima Cut and Take Down Method far surpassed the average rate of 55 percent yielded by conventional demolition methods. When this is combined with the recycling rate for materials from the shell of the building—namely concrete debris and steel scrap, which are not affected by Kajima's new demolition method—the recycling rate climbs to over 99 percent.

In addition, as there is minimal need to move heavy equipment and people to the top of a building, operational safety is also greatly improved.

Although this method was developed for buildings with a steel-frame structure of up to 20 stories, the Kajima Cut and Take Down Method can be applied to larger buildings as well. 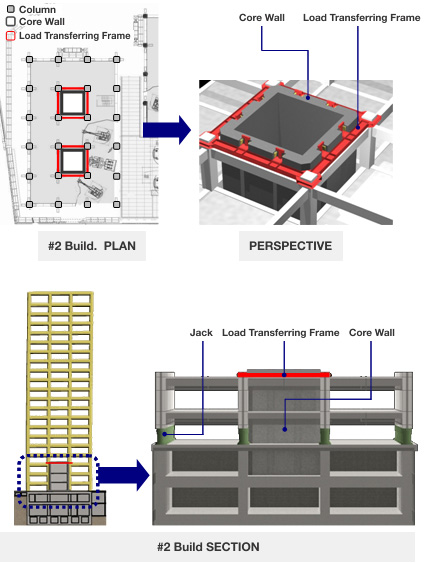 A "core wall" is a temporary reinforced-concrete structure located in the center of a building designed to absorb the potential horizontal forces generated by an earthquake. A "load transferring frame," comprising a steel frame, is set up in a column in four corners where the core wall is enclosed.
If an earthquake occurs, the core wall and the above-ground part of the steel frame combine to provide earthquake resistance.
The system also includes safety systems such as a seismograph and an earthquake warning system.

Cut length of 70cm for a column and take off

Take down all jacks

After doing from (1) to (2) process for all columns, we take down all jacks

Take out beams and floor slab of the next upper floor

Home > Technology & Services > The Kajima Cut and Take Down Method