A total of 130 Kajima and partner employees, participated in the Hirose River 10,000 People Project held on September 24, 2016 to pick up trash along the Hirose River. Participants included 12 employees from the Tohoku Branch and 118 from Rokushinkai, a group composed of partner companies.

The Hirose River 10,000 People Project is a joint initiative by citizens, local government, and companies to protect the natural environment of the Hirose River, the symbol of Sendai City, and make it enjoyable to more citizens based on the concept that 10,000 people represents 1% of the one million population of Sendai. The cleaning activity reached its 22nd anniversary this year since its launch in 2002. The Kajima Tohoku Branch participates in the all-round voluntary cleaning activity every fall together with Rokushinkai. 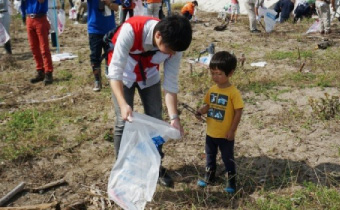 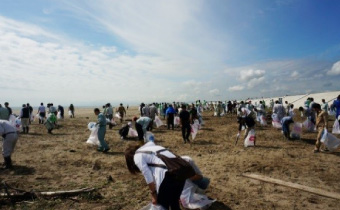 Many participated in cleaning under a clear autumn sky 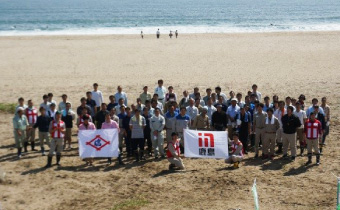 Kajima accepted participants of the three-day private sector training for teachers program held by the Keizai Koho Center (Japan Institute for Social and Economic Affairs) between July 27 and 29, 2016. This program is implemented as an activity to promote dialog between economic and education circles. In Fiscal 2016, 20 teachers participated in the program, including vice-principals that belong to the Kanagawa Prefectural Board of Education. The program was held as an opportunity to train teachers in managerial positions.

On the first day, the participants attended a classroom lecture on Kajima and the construction industry and then took a tour of a civil engineering site in Yokohama City. On the second day, they were introduced to Kajima's human resource nurturing and exchanged opinions. In the afternoon, they took a tour of a hospital under construction in Tokyo. On the third day, they took a tour of the Kajima Technical Research Institute and engaged in group work to review the three-day program. We hope that this program serves as an opportunity for teachers to compare education at school with Kajima's construction sites, exchange opinions with one another, review their workplaces and jobs, and apply what they learned at school. 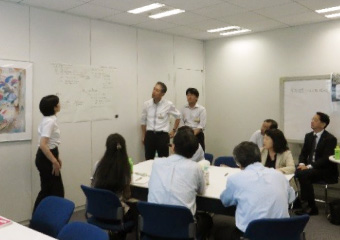